The Kosovo War – some background

Kosovo was not a war started by the Serbs. It was largely the work of the great Western powers who wanted a  war that would  advance their own selfish interests. They planned it, willed it and ultimately made sure it happened.

The Americans, British, French and Germans all colluded illegally to create the Kosovo Liberation Army in Albania in 1996. In defiance of sanctions they secretly  trained them, equipped them and supplied them with arms.

This army then crossed the border into Kosovo early in 1998 with the intention of taking the whole of the Serbian province by force – an attempted invasion of a sovereign state, illegal under international law and the UN Charter.  It almost succeeded.

The KLA had control of most of Kosovo before Serbian forces rallied and retook much of the territory they had lost. This operation to recover sovereign territory prompted the western powers to launch a huge propaganda campaign against the Serbs portraying them as vicious oppressors of the Kosovo Albanians.  International press coverage quickly fell into line.

Both sides were then summoned to peace talks by US diplomat Richard Holbrooke. The  Serbs were forced to withdraw under a peace agreement which the KLA then promptly broke by re-occupying the Serb lands.

She swiftly appointed William Walker, a notorious diplomatic fixer, to head the UN Verification Mission in Kosovo. His real job was to engineer the circumstances that would justify NATO intervention. This became mission accomplished the moment Walker arrived in the KLA village of  Racak to investigate the alleged massacre of 45 Albanians with gunshot wounds. https://youtu.be/_P7hQ-4xRvQ

Although it was  later exposed as  a crudely staged deception, Walker declared on the spot that  it was a massacre committed by the Serbs, an ‘unspeakable act’ and a crime against humanity.  This gave Albright all she needed.

Within days both sides were called to showdown negotiations at the imposing French chateau of Rambouillet.  The strategy for the talks was simple: to get the KLA to accept terms giving them most of what they wanted and to make the Serbs an offer they couldn’t possibly accept.  https://youtu.be/Y_8iQoXn-LY

Throughout the talks the world was fed constant reports of Serbian intransigence. It is now known that, surprisingly, they had actually agreed to many harsh demands. The Serbs’ final rejection only came when the Americans introduced new terms at the last minute including the imposition of a full NATO occupation force.  European politicians widely viewed  this demand as unacceptable for any sovereign nation.  And so the die was cast.

Rambouillet was a monumentally cynical stitch-up that brought chaos to the people of Kosovo. NATO’s 78 day bombing campaign wrecked the Yugoslav economy and provoked precisely the humanitarian catastrophe it was supposed to prevent. But it also restored NATO credibility, giving the alliance a new sense of  power and purpose now the Cold War was over.  And, above all, the illegal bombing allowed the western powers to achieve many of their most cherished strategic objectives. 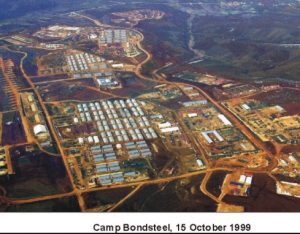 It enabled the US to destroy Yugoslavia, a state high on its list for ‘regime change’;  secure its oil supplies by building the Caspian oil pipeline;  seize land in Kosovo to build Camp Bondsteel, its biggest international base outside the USA, and help itself to the Trepca silver and lead-zinc mines and other Serbian assets.  Germany, only a few years after re-unification, took part in its first armed combat since WW2, while  France and the UK were able to strengthen their relationships with the world’s supreme superpower.

The bombing that brought such disaster for those on the ground was a triumph for the major powers. The Kosovo war gave them just what they really  wanted.