This is an excellent example of the techniques being used to sustain the established version of the Balkan wars in the face of mounting evidence that it is complete nonsense:

Canada’s ‘Srebrenica Genocide Denial Law’: When Even the Truth Is No Defense

Never mind the slow but steady dismantling in the fabled West of the “welfare state”, that temporary horror the elites grudgingly used to tolerate. But that was only as a means of pacifying their subjects and winning over credulous hearts and minds in the competing socialist camp, while it still existed. To be fair, concern for public well-being never was an ideological item in the Western “value” system to begin with. It was dissimulated for a while merely as a tactical measure to confuse the masses. But one assumes that at least the various personal “freedoms” that Western countries used to be famous for indeed were an integral element of their political institutions, values deeply ingrained in their culture.

Canada is the latest champion of Western, trans-Atlantic values that is sending a clear message to the world that such assumptions are poppycock. 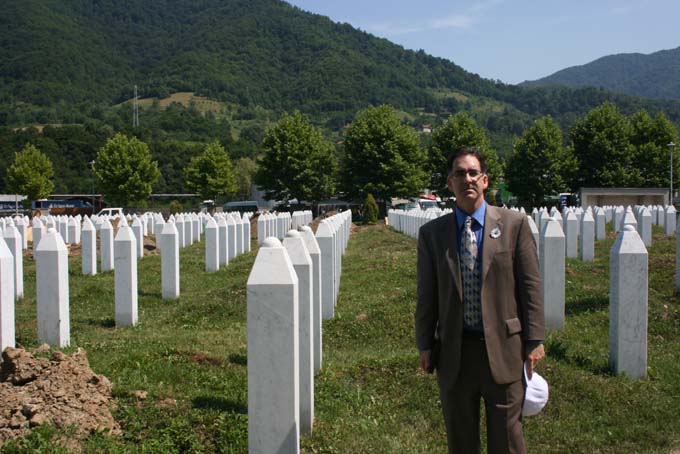 A major scrupulously legal assault on freedom of speech and conscience as well as scholarly research (and we are not talking here about the rampaging of informal terror squads such as Antifa) is in the works in Canada. A Srebrenica genocide denial law is coming up soon for parliamentary vote in Ottawa. It is being sponsored by MP Brian Masse (brian.masse@parl.gc.ca) (image on the right). The pending bill is the result of a petition filed by a Bosniak lobby group in Canada, “Institute for genocide research.”

The “institute” is not known to have published a single serious and academically viable book or scholarly paper on any subject whatsoever, including Srebrenica. It is a comically misnamed ethnic pressure group financed, as usual, by mysterious patrons. But given the manufactured climate of opinion, unless this bill is strongly and competently opposed, there is little doubt about the outcome.

Here is some basic information about this parliamentary project, now known as Petition No. 421-03975, presented to the House of Commons on May 29, 2019: click here.

And here are the words of the sponsor, Brian Masse, at Canada’s House of Commons as he put the matter before his colleagues:

“Madam Speaker … the House unanimously declared April as ‘Genocide Remembrance, Condemnation and Awareness Month’ and named genocides, which have been recognized by Canada’s House of Commons, including the Srebrenica genocide.

“It is time for the government to extend resources to commemorate the victims and survivors of genocide, educate the public and to take specific action to counteract genocide denial, a pernicious form of hate which reopens wounds and reinvigorates division. Truth is justice; honesty is the path to reconciliation and peace.”

Just so that no one is taken in by this fine rhetoric, the geopolitical significance of Srebrenica (forget about truth, justice, reconciliation, and peace) should briefly be recalled. The alleged failure in July of 1995 of the  collective West to come to the rescue of 8,000 “men and boys” in Srebrenica was transfigured into the pretext for the “Right to protect” (R2P) doctrine. That fraudulent rationale was used for subsequent “humanitarian interventions” which wrecked and plundered at least half a dozen countries and cost about two million mostly Muslim lives.

But contrary to interventionist propaganda and the simplistic cant of politicians, always campaigning to attract a few more ethnic votes and to impress the political correctness brigade with their loyalty to the right causes, in the real-world there exist complex issues not given to simplistic reductionism. Srebrenica is one of them. (Also here,  here, and here.) To paraphrase Polonius, there are indeed “more things in heaven and earth, than are dreamt of by politicians,” eager to please special interests.

One of the major pertinent issues here, of course, is the factual question of what actually happened in Srebrenica. A staggering amount of research has been done on that subject that one supposes busy politicians, long out of school, may be excusably ignorant of. Canadian politicians in particular may be generously excused for not keeping up with  Srebrenica developments because their hands are presumably full sorting out genocides closer to home.

A fundamental issue that comes to mind straightaway, and voters anxious to protect their liberties might want to bring it to the attention of their parliamentary deputies, has to do with freedom of speech and conscience, not whether or not genocide occurred in Srebrenica. Section 2 of the Canadian Charter of Rights and Freedoms rather unambiguously guarantees “freedom of thought, belief, opinion and expression, including freedom of the press and other media of communication” as fundamental rights. May the supreme law of the land be taken at face value?

How do MP Masse and colleagues who are contemplating to vote for his “genocide denial” bill propose to reconcile its language with the liberties which are constitutionally guaranteed to all citizens of Canada (and presumably also to foreign nationals on Canadian territory)? Or with the fact that Canada is also party to international agreements which guarantee freedom of conscience and expression, such as the UN Universal Declaration of Human Rights? Articles 18 and 19 of the Declaration, which deal with freedoms of thought, opinion, and expression should in particular be pondered by Canada’s lawmakers.

The ghastly thing about this is that the Srebrenica genocide denial law would not even change anybody’s mind about Srebrenica. But it would suppress (have a “chilling effect,” as they aptly put it in neighboring America) public discourse on the subject and would therefore constitute a serious infringement of Canadian citizens’ human rights. That is the issue of principle. All but zealous Balkan combatants should manage easily to agree on this much, and it ought to be gently stressed to befuddled Canadian legislators. A member of parliament is free to think whatever he or she wants about Srebrenica, with or without adequate information on the subject, including that it was genocide. But for Canadian citizens of all stripes and backgrounds, including those who happen to be legislators, their fellow-citizens’ freedom of expression should take absolute priority over the agenda of a Balkan lobby. A legislator who sincerely thinks that Srebrenica was genocide can and should still vote against Petition no. 421-03975 on freedom of speech and conscience grounds alone. Assuming that  those values matter in countries that boastfully claim to have copyrighted them.

It so happens that the aforementioned bogus “Institute for genocide research” has a record of attempts at free speech suppression, targeting those who think differently about its pet projects. In 2011 the “institute” made an unsuccessful attempt to steer a Srebrenica genocide denial law through the Canadian parliament. “Institute” scholars then took their revenge on American-Serbian professor Dr. Srdja Trifkovic, preventing his entry into Canada to deliver a lecture in Vancouver by falsely alleging to immigration authorities that he was a dangerous hatemonger, or something to that effect. The incident at the time was amply covered by Global Research. Prof. Trifkovic fought the spurious allegation against him energetically in Canadian courts and won. The upshot of it was that Canadian taxpayers lost considerable treasure in a wasteful judicial confrontation instigated by agenda-driven lobbyists.

The proposed law, be it mentioned in passing, is also manifestly discriminatory in relation to the Canadian-Serbian community. Considering the cultural role of spitefulness (inat is the native word) in the region that the lobbyists come from, that may well be its true and ultimate inspiration. Is there a single Canadian Serb who thinks that what occurred in Srebrenica was genocide? The proposed law would nevertheless have a discriminatory effect on the ability of members of the Canadian Serbian community, as such, to enjoy the freedom of expression guaranteed to them and to all Canadians by Canada’s constitution. As Canadian Serbs, they would be obliged to either maintain public silence about an issue they regard as being of vital interest to their nation and community or, were they to speak up in accordance with the dictates of their conscience, to face criminal prosecution. So much for all the “Atlantic Charters” and their associated “freedoms.”

Canadian legislators should ponder the fact that Canada does not have a Holocaust denial law protecting the dignity of six million victims, yet its parliament is contemplating a massive curtailment of its citizens’ civil rights in a matter involving 8,000 unverified deaths. That is a degradation and in-the-face mockery of the pain of the Jewish community. But it gets even worse, or tragicomic if one prefers. In its Tolimir judgment in 2012, the vaunted Hague Tribunal ruled that the killing of three individuals in the nearby enclave of Zepa (which is part of the same conceptual package with Srebrenica) constituted genocide (Trial Judgment, Par. 1147 – 1154). That was allegedly because those individuals were endowed with such extraordinary importance within the community of Zepa that, as a result of their demise, the community was rendered unviable, hence subjected to genocide. The point is that denying this absurd and tortuously reasoned finding of the Hague Tribunal concerning Zepa (a place that assuredly no member of the Canadian parliament had ever even heard of) by operation of the projected genocide denial law would also subject the careless speaker who took his rights seriously to criminal liability. That is the absurd level to which the “genocide denial” rhetoric has degenerated.

As an American citizen, this writer is quite prepared to stand in any public square in Canada and to proclaim that Srebrenica was not genocide. It would in fact be a pleasure to be detained by Her Majesty’s authorities in order to accomplish a lofty civic purpose that should benefit all Canadians. The resulting proceedings would ultimately enhance Canada’s judicial culture by testing the constitutionality of this legal travesty before the Canadian supreme court.

In the immortal words of Diana Johnstone, the “denial” of Srebrenica “genocide” is sufficiently justified by the fact that it is not true. The Srebrenica lobby and its eager acolytes in Canada’s Federal Parliament in Ottawa should grow up and accept that.

Stephen Karganovic is president of “Srebrenica Historical Project,” an NGO registered in the Netherlands to investigate the factual matrix and background of events that took place in Srebrenica in July of 1995.